There are some amateur golf tournaments where it can take 1 to 2 days to finish a tournament. The intense of these lengthy tournaments is to find the best. The time of a tournament depends on its rounds.

How Long is a Golf Tournament?

Rounds of a Golf Tournament

As we all know the professional tournaments are very competitive because there will be many high skilled payers. As time passes the competition gets even harder than before.

Playoff- Sometimes it seems that because of the tough competition the organizer couldn’t finish the game on Sunday. Sometimes the organizer takes the tournament into a playoff.

Playoff is a term that is used to determine the winner of the game. If there is a tie between the scores of the golfers, then the organizer uses the playoff to get a winner from the tournament.

After reading about the playoff I hope that you have some knowledge that there can be time delays in finishing a tournament. Playoff is one of the parts of the time delay. We will discuss the time delay in the later parts of this article.

How Long is the US Amateur Golf Tournament?

Format of the US amateur golf tournament- To select players the organizer holds a two days stroke play. In the stroke play, a player has to play against the whole field. That means a player will be selected by counting each of the shots the player takes. The organizer will select 64 golfers from the two days of stroke play. These 64 players will be advanced to play the next round. After the two days of stroke play the selected player will start playing knock-out matches that mean after losing one game there is no chance to remain in the game.

The player has to go home. All the knockout matches are held in 18 holes course. However, there is an exception in the final of this tournament. The final is played in a 36 holes course. The final of this tournament is divided into two halves one is in the morning and another one is in the afternoon. Each half is played in 18 holes round.

The knockout rounds continue till there is a winner in the tournament. Almost all of the golfers in this tournament are young golfers who are trying to build a career in the golf profession. This tournament contains very hard competition and all the golfers have to go through a very hard situation. Especially, the winner of this competition faces a hard situation from all. We shouldn’t neglect the young golfers at all. 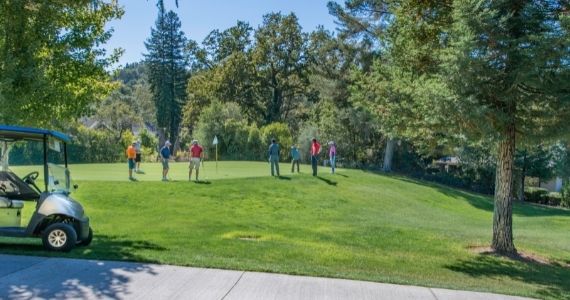 How Long is a Golf Tournament

Why There are 4 Rounds in PGA Tournaments?

One of the main reasons is to determine the best player of the week. As the winner of a 1 day tournament can be a play who only shines for that day. But with a 4 rounds long tournament all of the players will get their chance to show their best performance. That means there will be a quality winner from the tournament.

Another reason for the 4 rounds is the sponsorship of involvements. As we know that there are huge numbers of sponsorship in the PGA tournament.

Another reason is to sell the tickets properly. As there is a specific amount of tickets in the tournament the tickets have to be sold properly. For this, the 4 days tournaments are very suitable. In the first 2 days of the tournament, the crowd of the fans is very little. After the first two days and the cut, all the remaining players are highly skilled.

Also, for the 4 day long game the live telecasting channels get a huge advantage in gaining more TRP by telecasting the sport.

Reasons for the Time Delay in Rounds

We have mentioned above that there can be time delays in the tournament. There are many reasons for this. Let’s discuss those reasons:

Ways to Reduce Time Length in a Tournament

Now let’s discuss how to reduce the time delay from a tournament.

How to Prepare for a Golf Tournament?

It is often searched question on the internet before the starting of the golf tournament. There are some ways that can help a player to have a good preparation for the game. Here are some important issues that a golfer can follow to prepare for the tournament.

Here are the basic tips that I can give you to prepare for your game. But there are no such tips that can improve your skills.

How Long Does it Take to Complete 18 Holes of Golf?