Skip to content
A Golf shamble is a fun golf tournament. The tournament follows the rules of golf scramble. Shamble is played as a team. As in a scramble, all the members of the team tee off the ball. From all of the players tee off the best shot is selected as the winner. But unlike the scramble in shamble all the players play with their individual balls.

What is Golf Shamble

All the players tee off their balls until the ball is holed out. In shamble, each of the golfers will have the advantage of their best derive. The best part about this tournament is that all the players improve their shots. So call out your partners and arrange a shamble tournament to have all the fun.

Here are the rules of the golf shamble:

These are the rules for the golf shamble. Rather than these rules, all the rules of the golf course are applied. But a player must remember that there is no gimme in this tournament. Every player has to be holed out. Also, the rules can be vary depending on the team members. There can be 3 or even 2 players in a team in the tournament. 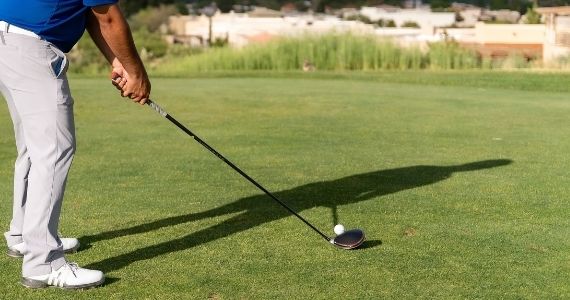 What is Golf Shamble

How to Play a Shamble Tournament?

Tee off- In the shamble tournament, each team will consist of 4 or 3 or even 2 players. At first, all the members of a team will tee off their ball. After that, they will observe all the shots of the team members and they will choose the spot of the best and suitable ball position.

This is where the twist of the shamble is. All the players of a team will place their balls in that position to take their next shot which is known as the 2nd shot. 2nd shot is the theme of the shamble tournament. Suppose there are four players named M, N, O, and P. If the player P take the best shot from where the next shot can be taken easily then all the M, N, and O players of the team will place their balls into that position and will take their 2nd shot.

For this P will be marked in the score sheet. That means shamble players have an advantage. If there is a good driver in the team then all the team players can rely on that player for their 2nd shot.

After choosing the right point and taking the 2nd shot all the players of a team will continue to hit the ball till they holed out. But there will be no choosing position after the 2nd shot. That means the players of a team won’t be able to choose a suitable ball position to take their shots. They have to continue hitting the ball from that position where the ball resides. This means players will play a simple golf game from that moment. They will use their previous position to take shots.

Here are some scoring techniques that an organizer can follow:

Difference Between Shamble and Scramble

As we said in the beginning, the shamble is one type of scramble with some differences.

In a scramble, there will be a couple of teams. Each team will consist of 2 to 4 members at most. In a scramble tournament, all the players of the team will tee off in the beginning. There will be a team leader in the team, which is similar to the shamble. After the first tee off the leader will choose the best hit where they can easily take their 2nd shot. After the 2nd shot, the team leader will again choose the suitable place for their 3rd shot.

This process continues till one of the players from the team hits the hole. In the scramble tournament, there will be only one score recorded for the whole team. After hitting the hole by one team member, the team will be advanced onto the next hole.

In the shamble, there is only one choosing point. The players of the team will take their first shot and the team leader will select the position for the next shot (Second shot). After that, there will be no more choosing option. That means the player will take their 2nd shot and continue to hit the ball with their approached position till they holed out. Unlike scramble, all the players of the team will have to hit the hole. There will be 4 scores for each of the team members.

But shamble will be a good choice to have fun and to improve a beginner skill.  Also, in shamble, every player has to score for the sake of their team which will push a player to score better for their team.

Strategy for a Golf Shamble Tournament

While assembling the team, make sure that there is a skilled player in your team who can drive a shot with perfect accuracy. Having a player of good skill will give your team a huge advantage. Let the skilled player tee off after all the players tee off for the 2nd shot. Determine the team player's strengths and use them according to their skills.

If anyone is trying to arrange a golf tournament, then they can arrange a shamble golf tournament to make the tournament more exciting. Shamble is a game for advanced-level golfers. But beginners also can play. There are some rules for a shamble game and also there are many scoring systems.

Also, we have described the difference between shamble and scramble in this article so if anyone has any confusion, then they can read the differences to clear their confusion.

So, next time gather your team and arrange a golf shamble tournament with the help of our article to have a very exciting game session.