Whenever entering into the Golf Game, a common factor has to face after several periodic time which is considered as the distance measurement. Hitting the ball with a driver and throwing it for a long distance is obvious. In this topic, Golf club distances with a cheat sheet will be explained and some of the major terms will also be described as they play an essential role in increasing the distance.

The expecting rate of landing the ball is majorly dependent on how fast the ball gets hit. Simple measurement is, speed of the club will throw the ball further. But there is a difference between pushing the ball for a distance and playing the ball for the game. That is because; pushing the ball into a long distance is easy. But if the ball doesn't come with the combination of swing and degree, there is no chance of having a perfect shoot. Judging and measuring the distance can surely save from many strokes over 18 holes.

Before knowing the distance list, there are two surveys of PGA and LPGA which reveal that professional level golfers get a distance range of 280 to 320 yards from their drivers. LPGA golfers come second into the listing with a distance of 230 to 270 yards where the amateur level golfers remain in the average range of 190 to 200 yards. This range is based on average golfers. So it can be increased or decreased depending on the individuals.

Major Facts for Having the Distance

First of all, talking about the distance, some factors are the reason for the distance. And they are:

Gameplay experience: Talking about the distance, experienced golfers take the majority of advantage in this sector. Beginner or amateur golfers most likely don't go for the longer shots as they remain new to the game. That is why; creating a distance through the golf club into the ball comes from the professional golfers and their long time gameplay experiences.

Golfer differences: Another major fact that creates a role for having distances is the differentiation of the golfers. Three types of golfers are available in the golf game. Male golfer, female golfer, and kid golfer.Besides, some other factors are required for the golf club distances. Sex, height, and body fitness are those facts.

Swing speed: Long hit is not possible without power. And the power comes from the swing. Body fitness and strength may create a role for the swing, but the main fact is, the more the swing the more distance a ball can make.

Weather condition: Last but not least term that can affect the high distance shot is the weather. There is no control and surety of weather either it gets rainy or windy. Though hot season doesn't create any difficulties in longer shots, windy and stormy weather condition appears as a barrier against the ball whenever they get hit for a longer shot.

Distance of the Bridgestone golf ball through hit is categorized in three different stages. Male golfer, Female golfer, and Kid golfer. And the differentiation comes for accuracy, stamina, power, and height. As golf club distance gets measured through the yard, club varieties and gender are also getting important.

Starting from the male golfer, there are some different charts according to the time and season. So here the distance sheet has been listed below:

As the distance cheat sheet has been given above, there is a loft angle along with the type of club and the destination where the ball will fall and take place. This is the average listing among the male golfers which means; the listing may vary or get changed according to the player's ability and performance. 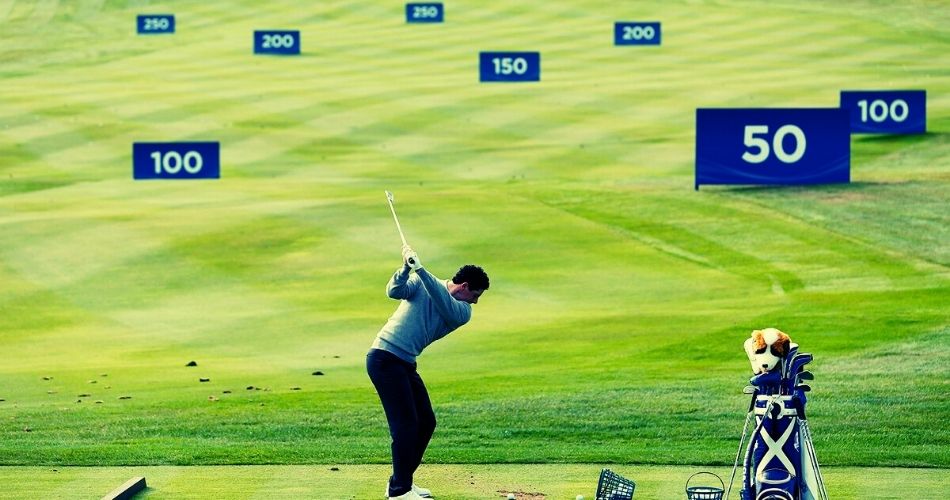 So this is also the average listing for the female golfers along with the loft angle and the probable Yard distance. This listing is also changeable according to the player’s stamina and performance.

A common term that comes into this factor is measuring the distance. There are two methods available that can be used for measuring and judging the distance of the ball from the hit by a golf club. One of them is the driving range method and the other one is distance measuring meter and smart

The driving range method is a timely procedure but it can create a great result for having an idea about the distance. In this process, use 10 types of ball along with the different types of clubs and apply for the same position and swinging speed into the ball. After hitting all the balls along with the clubs, measure the pattern where the majority of the balls lie at the closest area. Choosing between one of them will let to know about the probable distance range.

And another way is, using technology. Though it is very easy to use and shows accurate measurement, sometimes, it comes out a little bit expensive and hardly available on some golf courses. Distance range meters and smartwatch GPS are two common types of ways that help to measure distance. In international games or premium golf courses, another functional way that is called laser rangefinder gets used for measuring the distance. It shows exactly the same and accurate distance that helps to reveal the golfer's gameplay experience.

The Average Distance of Golf Drive for Male Golfers

Recently, a new distance measurement also has been added to the average listing. 300 yards of distance has been accomplished by some of the professional level golfers. Though this is a little bit longer distance compare to the average one, but still it has been listed as it got performed by a good number of golfers.

The Average Distance for Female Golfers

Like the male, female golfers are also divided into two types of categories. Professional level golfers and amateur golfers. Professional ones generally hit the average distance of 190 yards where amateur golfers can hit a maximum distance of 80-90 yards. But still, a short listing of average distance along with the type of club for female golfers has been explained. Note that, both of the professional and amateur level golfers have been listed.

Ideal Iron for a Great Distance

As irons are available in different categories, the perfect one for hitting a long shot is the 7 Iron which also can be considered as the baseline. From a 7 iron club, the average distance that can be possible to hit is 140 Yards.

An average listing of all the types of Iron with the distance range is,

All these distance listings are the average one from each of the Clubs. But the distance rate has a chance of either increasing or decreasing depending on the golfer and their power.

Not only the iron clubs get used for making long shots, but woods also get used by both the professional and amateur level golfers. For the male professional level golfers, the average distance that comes from wood is almost 200 yards where the amateur golfers can make the maximum of 160 yards. Where the women golfers can make the distance of 160 yards. 3-wood and 5-wood are the most demanded and popular types of woods that get used in the game.

Distance according to age

Having differences of age and gender in the golf game is simple. That is because golf games get played by both men and women. It even has a great demand among the kids too. Therefore, the range of distance will surely not stay the same between them.

This listing from below has been scored and measured according to the average age of all golfers.

All ranked and experienced players of both male, female, and children have been listed in this average chart. But the distance listing will increase or decrease if it gets maximum distance of shot from the professional golfers. As to compare the longest drive range from the last is 235 Yards which get accomplished by the golfers from 21-30 years old. And the reason is, majority of the professional and experienced level golfers come from middle age. Besides, there is a great chance of having a long distance of more than 300 yards from these aged golfers.

Increasing the driving distance of the golf game becomes very essential after several times. Because professional level golfers always desire to make longer shots with zero handicap rate. That is why; hitting longer shots off the tee becomes addictive and essential to some type of golfers. But the fact is, making distance shots is not an easy task at all. Some of the great steps have to follow to get perfect and accurate distance shots. Some essential terms can be followed for making the procedure successful. Let's have a quick eye on them.

1.Perfect height measurement of ball and driver: The very first process that has to follow is, adjusting the driver's height with the ball. In the beginning, the ball gets placed into the tee from where the ball gets launched for either high or low level shots. While lining up the ball and the driver, the top area of the driver will remain at half of the ball. This will help to launch a perfect and long distance shot to the ball even at moderate swinging speed.

3. Comfortable hitting position: As the total distance of the shot depends on the golfer, a comfortable and wide position is also important. It helps to let the player a longer shot with great comfort. Placing the legs closer to the driver may not become useful for having a distance. The perfect placing will be positioning the legs almost 2 feet away from the club and make an angled shape of the body. In this way, a long shot can be easily achieved.

So all these terms and charts show the overall rates of distance for men women and kid golfers individually. But the most important part of having a distance shot is power and swinging. The accuracy of the swinging is as essential as the power to deliver through the club into the ball.

From the beginning of the game, distance and long shots may not become useful. But whenever it takes place into the experience of level for increasing the gameplay, there will be a no better option and shot rather than the distance one for sure.